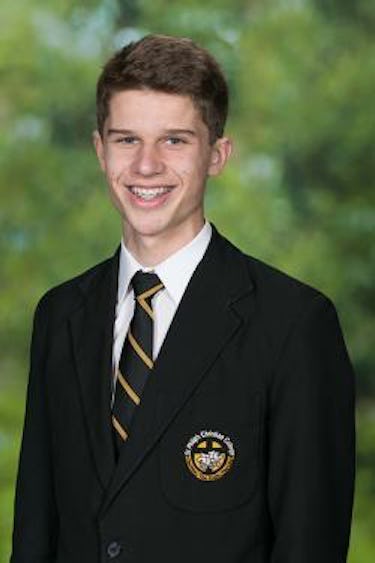 St Philip's Christian College Port Stephens was selected along with 20 other schools in NSW (out of 300 who applied) to take part in the Premier's ANZAC Memorial Scholarship 2017.Early in 2017 we commenced the application process to select one student who was enrolled in either Year 10 or 11 to travel on the tour. This process included applicants submitting a piece of work to be judged by a panel consisting of school and community members along with sitting an interview with the panel. The submissions by all applicants were of an extremely high calibre and the decision was very difficult for the panel. The panel was however, unanimous in their decision and Joshua Freeman of year 11 Was selected to represent our School in this trip of a lifetime.

Joshua had the chance to walk in the steps of Australian WWI soldiers who fought and died in Europe said he is “privileged” and “honoured” to have had the experience.

Josh Freeman, 16, was one of 23 students from around the state selected to travel to Belgium and France this year as part of the Premier's Anzac Memorial Scholarship.

“The expedition along the Western Front has first and foremost given me an overwhelming amount of respect for those who fought in the Great War and all wars that followed,” Josh said.

“Sixteen years of growing up in Australia and 11 years of schooling taught me the facts and the names, but I now see I hadn’t even begun to comprehend what it meant to be a soldier of the war.

“To stand on Belgian soil still disfigured by shell fire and to see 90-year-old stone monuments has been more effective than all of those things could ever have been.”

Josh set out for Europe on September 23. He travelled to the Western Front, visiting significant battlefields in Belgium and France.

He also took part in commemoration events in the town of Ypres in Belgium, and paid his respects to the 38,000 Australian soldiers who lost their lives there 100 years ago.

“This hasn’t been a free ride to see the sights of Europe, and not a single student on the trip ever believed that for a moment,” Josh said.

“It was a privilege to see the Eiffel Tower, but of abundantly more value was the privilege to experience the stories that defined the world we live in today.

“Ultimately, my hope is that by inspiring 23 teenagers from around the state, the Department of Veterans Affairs [the financiers of the trip] have been able to in turn inspire 23 communities to never forget the war.”

Before the trip, each student was given the name of an Australian WWI soldier to research.

“We were asked to find out as much about them as we could so that we’d be able to give a short presentation to the group about them when we visited their grave or, if they didn’t have one, their memorial,” Josh said.

The purpose of the task was to give the students a chance to connect with a soldier, to see them as more than a statistic.

Josh was asked to research Coultschovc Azieff. His first name was also spelt Kulchuk on his papers.

Josh Freeman, 16, standing at the grave of Coultschovc Azieff (his first name was also spelt Kulchuk), a WWI soldier he researched as part of the Premier's Anzac Memorial Scholarship.

The solider was Russian Australian that spoke no English or Russian, who was illiterate and whose family had shunned him.

“We don’t know why he was in Australia but we do know that just two years after enlisting he was shot multiple times in the chest and later died of his wounds on October 17, 1916,” Josh said.

“Interestingly, this guy was so unknown that the biggest source of information we found on him was a project that a 14 and 16 year old from Russia had done on him.

“His family had forgotten abut him but these two school kids we writing about him 100 years later.

“Kulchuk’s relatives now have no memory of him and his country deliberately blots out the memory of the Great War.

“He has become a ghost of a soldier remembered only by the few who’ve come across his story.”

Josh was able to make a presentation about his trip in a school Remembrance Day Service and also to the Nelson Bay RSL Sub-Branch for Remembrance Day.

Our runner-up for this opportunity was Noah Davis (Year 11). You can view his video submission below.

Back to Our Community