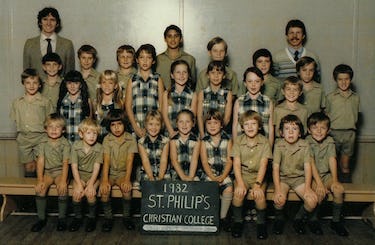 St Philip’s Christian College was founded in 1982 by the vision and efforts of the leaders and people of St Philip’s Anglican Church, Waratah. The founders passionately believed in the need for an independent school that would develop the 'whole child' - intellectually, socially, physically and spiritually; a school that would maintain high academic and behavioural standards and at the same time effectively proclaim the liberating truth of the Christian Gospel.

Classes commenced on 4th February, 1982 in renovated areas within the Church facilities. The College catered for students from Kindergarten to Year 7 during 1982. Each year thereafter, another academic year was added up to Year 10 in 1985. Year 11 classes commenced in 1988 with the first H.S.C. candidates being presented in 1989.

Up until 1984, the College operated entirely at the church site. During 1984 the present site was purchased and occupied. From then on, all further developments took place on this site. Historic Sparke House became the administration centre for the College with temporary transportable classrooms being used initially. Adjoining house blocks have since been purchased to increase the College grounds for building and playground usage. A detailed master plan has been developed and is being progressively achieved in order to provide first class facilities for St Philip’s students.

Initially, the College was operated as an undertaking of St Philip’s Anglican Church. However, in May 1985, St Philip’s Christian Education Foundation Limited was formed and this non-profit company took over the ownership and operation of the College. Parents and friends may join the Foundation to provide leadership and support.

In October, 1997 the College acquired Narnia Christian Preschool. Narnia has now transitioned to a 0-6 Years Early Learning Centre which is being rolled out in four of six schools.

2001 saw the completion of the next stage in the growth at the Waratah campus, as this campus moved to a three sub-school structure, being Junior K-4, Middle Years 5-8 and Senior Years 9-12.

The College now caters to over 1400 students from Pre Kindergarten to Year 12.

Back to Our Story