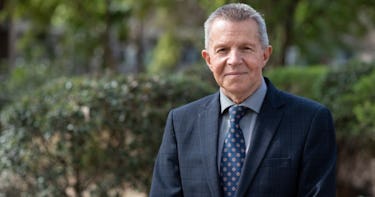 We are excited to announce that our Executive Principal, Mr Graeme Irwin, has been appointed a MEMBER (AM) IN THE GENERAL DIVISION OF THE ORDER OF AUSTRALIA for significant service to education, and to Christian schools’ associations.

The Governor-General, His Excellency General the Honourable David Hurley AC DSC announced the Australia Day 2021 Honours List which included the recognition of 570 recipients in the General Division.

The Order of Australia is the pre-eminent way to recognise achievements and service of exceptional Australians. We are thrilled to have Graeme recognised in this manner.

Graeme has been a member of the Hunter Region Independent Schools Association since 1990 and served as the Chair of the Australian Association of Christian Schools for twelve years before handing on the baton in 2020.

Along with four K-12 mainstream schools and six early learning centres, Graeme has also been responsible for the establishment of an alternate learning school, DALE, which caters for students with social and emotional disorders and a young parents school which provides school-aged parents with the opportunity of completing their schooling studies with their children by their side. Both of these initiatives have received national recognition.

Graeme is also recognised for innovation in ICT in Education, the introduction of Middle School into mainstream schooling and the development of in situ tertiary teacher training within the SPCC group of schools.

Graeme has a passion for quality education but above all a passion for God and seeing students receiving a holistic education and excelling in every area of their life. First and foremost, Graeme is a family man. He is married to Sue and they have three sons and a daughter. His relationship with his family has always taken precedence and his children are a testimony to the godly influence of Graeme in their lives.

We congratulate Graeme for this achievement and for his ongoing commitment to leading our organisation with passion and integrity.